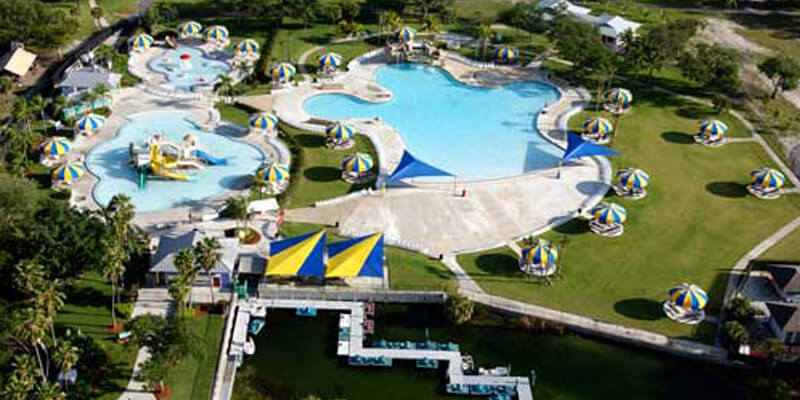 YT Park features two miles of concrete pathways for skating or bicycling, as well as a variety of sports for active kids such as basketball, tennis, a playground, and a fishing pier! Did we also mention volleyball?

The campsite features 61 paved sites as well as rustic camping, so if you’re coming from out of town, you may extend your day out!

The waterpark features a fantastic water playground as well as a pool for youngsters under the age of five. There’s a pool and a lagoon with a pretty cool waterfall!

Topeekeegee Yugnee Park, sometimes known as “TY Park,” is a 138-acre park in Hollywood that translates to “gathering place” in the Seminole language. Picnic shelters, a Fitness Zone, a playground, tennis courts, basketball courts, and volleyball courts are among the various amenities of TY Park. A two-mile paved trail loop around the park is ideal for strolling, jogging, skating, and biking. If you don’t want to bring your own bikes, you can rent one or two-seat bicycles within the park.

The park’s crown jewel is the seasonally open Castaway Island Water Park, which is open from March to October each year. Castaway Island features a water playground for children aged 5 and younger, a lagoon/swimming pool with a waterfall, and a large kid water playground with dumping buckets and slides. The lagoon was a sand-bottomed pool, but it was replaced with a hard-bottomed zero-entry swimming pool. Save money by arriving after 3 p.m. for a discounted entry charge, or purchase a season pass for one of the four Broward County water parks and return as often as you like!

Topeekeegee Yugnee Park is enormous, as is Water Park. There are three sections: a place for climbing slides for everyone, a child pool with a slide and games, and a large pool.

The water playground is organized around a large center area with slides. I spotted the kids lining up to go down the red slide, which also happens to be the highest of the playground’s three slides.

A separate play area for little children up to about 5 years old is located near the back of the main water playground.

This is a large wading pool with lots of lovely, colorful creatures like fish and ducks, as well as a boat-shaped slide. The Swim Lagoon, which lacks slides and fancy fountains, is a very large pool with zero entry on one end and a maximum depth of five feet (about 1.52 meters). Lifeguards are always present to keep an eye on things.

The waterfall at the far end of the pool quickly became a favorite. Many bathers gathered at this end, right behind a water curtain, as did we. It was entertaining to listen to the flowing water and see others on the opposite side.

I appreciated that it did not have the two-hour time limit that some Broward County parks do, so you could pay the admission price and spend the entire day there! The pools were clean and well-kept. It wasn’t a particularly crowded day when we went, but it wasn’t completely empty either, and the bathrooms were rather adequate for a water park. I didn’t sample the snack bar, but I saw people with all of the standard pool snack bar items, the pizza smelled amazing, and I’m not sure how we got out of there without buying ice cream, but we did.

The morning was rather peaceful for us, but around the time we left (2:00 pm), a camp group arrived, and there were lengthy queues at the slides. This has happened at every water park I’ve visited this summer. The kids were fine and there were no problems, but it was a busy day. I’m not sure whether you can phone ahead to find out what time the groups will arrive on the day you come. It’s worth a shot, and it’s worth the effort in whatever water park you visit.

The first interactive water playground area contains all of the necessary water park attractions, including dumping buckets, slides, and splash cannon regions atop a climbing structure. It is large enough to entertain most children (maybe not teens, but I thought it was pretty entertaining!).

The toddler area is my favorite part. A toddler interactive pool playground with slides and water cannons is available. This area is wonderful because it is completely separated from the rest of the water park.

The third room is the pool, and it is very stunning! This massive pool has zero access on one end and a stunning rock cascade on the other. Again, the house was spotless!

Overall, this park is well worth an afternoon visit. We paid $8 each to enter, and I think we had a terrific time! You have to adore all of the wonderful parks in South Florida!

Castaway Island is open from 9:30 a.m. to 5:20 p.m. throughout the summer and is at 3300 N. Park Rd, Hollywood, FL 33021. Please check with the park for the most up-to-date fees and hours before visiting, since they do change seasonally.