Gorgeous seabirds can be found on any beach or bay coastline, as well as in and around mangrove trees, seawalls, and piers in Florida. Because birds are most active in the mornings and evenings, these are the best times to observe them.

Many shorebirds, egrets, and herons in Florida are active after dark and could be seen on the beach during a full moon. Any pier with fishermen is a great place to watch pelicans and herons.

Many of Florida’s seabirds are migratory, and they can be seen in greater numbers during the fall and winter migrations.

Sarasota plays host to an incredible variety of exotic birds throughout year. Be sure to look for these favorite species during your stay.

Sometimes confused with the cormorant, the anhinga has a longer, wider tail with a pale brown stripe, and dark wings patched with silver. The neck is extremely long and thin except when expanded to swallow fish caught by the diving bird’s pointed yellow beak.

In South Florida, you can see anhingas hanging out near water all year. It’s common to see it along canals, reservoirs, and wetlands. The anhinga is distinguished by a few characteristics. For starters, it is a water bird, but it lacks the oils that ducks have that repel water. It can’t fly when it’s wet, so it’ll perch and spread its wings, allowing the air and sun to dry them out.

Majestic brown pelicans are often seen perched on channel markers or swooping inches above the rolling waves. An instantly recognizable pouched beak and webbed feet enable this variety of pelican to dive into the water to scoop up food. Mature adults have a white head, dark brown and gray body, and a incredible wingspan of over seven feet.

Pelicans, like many other Florida birds with showy plumage, were being driven to extinction by hunters eager to satisfy the public’s desire for plumes on hats.

Pelicans are nesting birds that live in groups. While most of their nesting sites are kept secret, we have seen them off Cedar Key nesting on Seahorse Key, which is closed to visitors during the mating season.

The ancient-looking Great Blue Heron is one of Florida’s largest and most famous wading waterbirds. Although it is frequently misidentified as a crane, it is actually a heron. The great blue heron, a distinguishable sight along Florida’s waterways, is the tallest of the blue-hued wading birds you’ll see hunting along the shorelines.

Standing at up to four feet in height, the regal great blue heron can be spotted wading along the shores of Sarasota’s waterways and coastlines. Mostly covered in gray, the king of Sarasota’s wading birds is identifiable by the white crown stripe extending from behind its beak. Particular to south Florida and some areas of the Caribbean, the great white heron (not to be confused with the white egret) may also be sighted occasionally.

The Roseate Spoonbill, one of Florida’s most magnificent marsh birds, can be found wading through lakes, estuaries, swamps, and intracoastal waterways. This regal and unusual bird, regarded as a species of special concern in Florida, will generally avoid areas largely populated by humans.

Sarasota is one of the few places in America where observers can find the roseate spoonbill, a somewhat odd yet elegant pink bird that is often mistaken for a flamingo. While its similar color may confuse visitors, the distinctive spatulate bill and bald crown help to differentiate this bird from its Caribbean cousin. 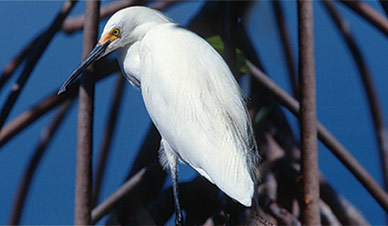 The yellow feet and long black legs help the snowy egret to stalk small fish swimming alongside the edges of Sarasota’s ponds and coastlines. This brilliant white bird is distinguished by its black beak and small yellow accent under the eye. Though smaller than the great egret, the snowy egret’s flight over Sarasota Bay is still a breathtaking sight.

The white ibis is one of the most prevalent birds in and around South Florida’s wetlands. The ibis is such an iconic part of the area — a signal of hurricanes coming and going — that the University of Miami made it its unofficial mascot in 1926 and its official mascot in 1987. When you look closely at Sebastian, you can see an anthropomorphic white ibis.

Often seen along Sarasota coastlines, the white ibis sometimes wanders inland to search for food with its curved, orange-red beak. Mostly white in color, this medium-sized bird’s mask and legs are a matching red with black accenting the wing-tips.