One of our absolute favorite beaches in Florida is Marineland. This beach is right on the edge of St. Johns and Flagler County lines. A short drive from St. Augustine or Daytona. Marineland Beach has everything a beach-goer can love during any season in Florida. During the summer months, we take refuge from the heat in the water, picnic under a pavilion, and shower off before sanding up the car! Although I don’t have pictures shown, there ARE spots along the shoreline without rocks hindering your swimming or time in the waves.

Marineland began as Marine Studios around June 1938, with the intention of allowing Hollywood filmmakers to record underwater footage for feature movies and newsreels. According to a newspaper article featured on Marineland’s website, about 30,000 people packed the oceanfront attraction on its debut day, and it rapidly became known as the world’s first oceanarium.

According to its website, Marine Studios evolved into Marineland of Florida in the 1950s, becoming one of the state’s main public attractions, with up to 500,000 visitors per year. Older, deteriorating structures were demolished in 2004, and construction of a new, modern institution centered on teaching and animal-human interactions began. The attraction reopened in 2006 as Marineland’s Dolphin Conservation Center before being purchased by Georgia Aquarium and renamed Marineland Dolphin Adventure in 2011. In 2018, the historic arch entrance was renovated and re-dedicated.

What is most appealing about Marineland

The spectacular thing about Marineland is that it is perfect during the winter months too. When it’s too cold to swim in the ocean, we enjoy jumping on the rocks, searching for shells and wildlife, and listening to the waves crash.

What is most appealing about Marineland is that it is always quiet, enjoyed mostly by locals, and less crowded than the nearby tourist beaches. Vacationers and tourists mainly stay further South towards Daytona Beach or near historic St. Augustine. This leaves Marineland Beach available for those who want to relax and enjoy their family time. 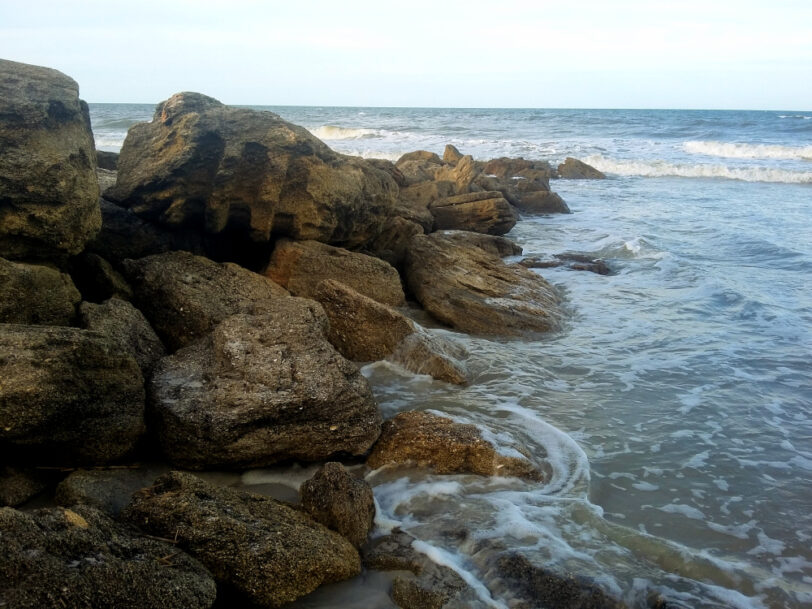 Another great thing families will love about Marineland is that you can’t drive on this beach. I remember being completely stressed when I took my toddler to Daytona Beach for the first time. I was so worried, we didn’t stay and opted to go somewhere cars could not venture instead. Kids, water, and cars don’t mix. I urge parents of young children NOT to take their kids to Daytona Beach, it isn’t safe for them.

Swim with dolphins at Marineland Dolphin Adventure in St. Augustine, Florida, during your next trip to Florida for an incredible, once-in-a-lifetime experience. If you like dolphins, this is your chance to touch, play, and swim with them at the magnificent oceanarium in Florida.

If it is your first visit, be sure to stop at Marineland Dolphin Adventure. They offer inexpensive viewing opportunities of their Dolphins AND even opportunities to SWIM with them! This adventure makes a great birthday gift or anniversary date!

Marineland’s outstanding trainers employ orders in training that people like us may mimic to get the desired and joyful result. We’re splashing the dolphin just to get royally splashed back! There was no one else! Zac can make quite a splash! I can’t describe how wonderful it felt to be in the water with this 500-pound dolphin. I’m not a great fan of deep water and never thought I’d enjoy being in the water with such a gigantic animal, but I was completely at peace and at rest when playing with our friendly dolphin. It was thrilling to share this with my spouse and children. Life-long memories are built of first-time experiences shared as a family!

Marineland was known as Marine Studios and was the location for several movies and firsts in Dolphin marine science. The first Dolphin born in captivity was born at Marineland AND the first dog to scuba dive did so here too! I guess I shouldn’t be surprised, after all, Marineland is the world’s oldest oceanarium. Learn more about their history in “Marineland” by Cheryl Messinger before your visit.

Marineland Dolphin Adventure, which focuses on marine conservation and preservation, enables tourists to swim with the dolphins. This attraction provides a choice of ticket packages to fit any budget, ranging from general admission to seeing the dolphins to working in the water with a trainer and the dolphins. Other than public entry, all programs have age limits. If parents are planning a dolphin excursion with older children, they should make additional plans for children ages 2 and younger.